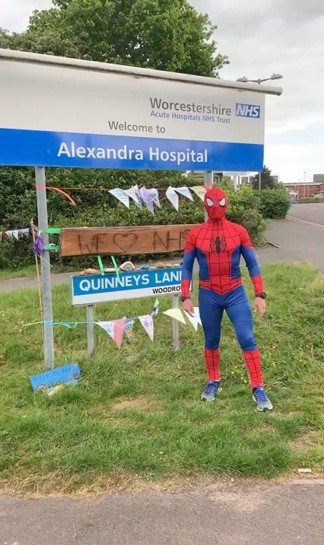 Following several discussions with Bro. Martin Carver, our JW, W. Bro. Les Leek, our Communications Officer and the WM Bro Martin volunteered to follow in Capt Tom Moore’s footsteps and raise money for the NHS Charities through a “Just Giving” page and the Masonic Charitable Foundation, by running, what in the end proved to be, a 200Km Marathon over several days, concluding at the Houseman Memorial statue in Bromsgrove High Street on Saturday 30th May.

It commenced on 12th May at the Alexandra Hospital in Redditch where Martin commenced as Spiderman before running through, over several days, the 31 Districts of Redditch dressed in one of his 3 costumes, Spiderman, Batman or Superman.

Following on from that success he then met with the Provincial Grand Master and Senior Nursing Officer at the Worcester Royal Hospital before running through Worcester, stopping for a photoshoot at the Guildhall and finishing at the Worcester Masonic Hall on Rainbow Hill where he was welcomed by our WM.

The next “Marathon” was through Birmingham commencing at the QE Hospital where Martin had a magnificent “Clap In” on the approach road lined with Hospital Dr’s, Nurses and staff before running past the City Hosp; ital in Dudley Road and concluding at Heartlands Hospital in East Birmingham, the route traversing Birmingham from West to East.

The Final Run commenced once again at the Alexandra Hospital in Redditch, through Finstall to the Princess of Wales Hospital in Bromsgrove, where, once again, he had an emotional “Clap In” by the Nursing and Admin staff before finishing by running through Bromsgrove and concluding in the High Street, where he was met by W, Bro. Patrick Firminger, PSGD, APGM, Chairman of the Worcestershire Festival 2022 Committee for the MCF, and the WM together with his family and friends.

The WM then, thanks to Martin’s sterling efforts, presented the APGM with a cheque for £1,000 for the MCF: this brought the Lodges contribution to just over £20,000, and then presented a Certificate of Achievement to Martin for his magnificent efforts both for the NHS and MCF Charities.