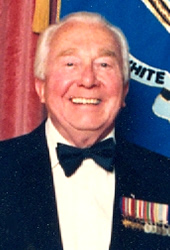 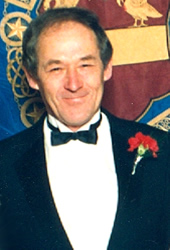 Bro. Chief Ordnance Artificer Charles Shave was initiated into White Ensign Lodge, Gillingham, Kent in 1953 whilst stationed in Royal Navy Barracks Chatham. Within days of his raising he was drafted to Sea and, even though a Chatham based rating, never returned to Chatham Barracks for any longer period than eighteen months for the rest of his service career. In consequence he did not progress through the offices of the Lodge.

On leaving the Royal Navy he moved to the Midlands but, rather than joining a Midlands Lodge, maintained his connection with his Mother Lodge. This did not of course prevent him from being a regular visitor to Midlands Lodges. In 1978, to repay their hospitality, he invited three ex matelots to go with him during the second weekend in December to the Installation Meeting of White Ensign, Gillingham. This was the start of a succession of years where the “trusty” four, under the guise of attending the Installation Meeting attended nostalgic weekends in Chatham.

Following the meeting in December 1984, during their journey by road back to Birmingham, Bro. Eric Crooks suggested that a Naval Lodge should be formed in the Midlands. In consequence it was decided to conduct a preliminary investigation to establish the viability of this idea. The three Midlands Provinces of Warwickshire, Staffordshire and Worcestershire all indicated that they would be prepared to accept a Speciality or “Closed” Lodge.

In January 1985 13 Founders held a preliminary meeting and the decision was taken to form a Nautical Service Lodge. A resolution was passed that a Lodge be formed under the Banner of the Province of Worcestershire and that approaches should be made to Lechmere Volunteer Lodge No 1874, another Service Lodge and the Mother Lodge of Bro. Eric Crooks, to sponsor White Ensign as their Mother Lodge.

The Constitution of the Lodge states:
“Membership of the Lodge shall be open to Past and Present Officers, Ratings and Other Ranks who have served under the ‘White Ensign’ for a period of not less than 12 months, or such period as may be approved by the Lodge Committee, or unless discharged as an invalid, and their Lewis(es). Service Documents must be produced as proof of service by such Past Officers, Ratings and Other Ranks.”

During the next 11 months 9 Founders Meetings were held at the Nautical Club, Bishop Street, Birmingham and, as the word (“Buzz”) spread, former members of the Royal Navy and Royal Marines made contact. In consequence of this some 27 Founding Members were present at the Consecration of White Ensign Lodge No. 9169 on the 5th December 1985.

The “Ship” was Launched, the Commissioning Crew on Board with a full complement of Officers. The following signal could be sent:
“The White Ensign Lodge is in Commission, has completed its Working Up period, has now joined the Craft Fleet and is, to all intent and purposes, Ready for Action.”

The Lodge very quickly became “Ship shape” and its instant success can be measured by the fact that at the first seven meetings that took place in the Lodges first year, some 1050 Brethren sat down at the Festive Boards. Only one of those meetings had less than 100 Brethren in the Temple and the Charity Account for the first year was in excess of £2,500.